Bias-variance tradeoff is a familiar term to most people who learned machine learning. In the context of Machine Learning, bias and variance refers to the model: a model that underfits the data has high bias, whereas a model that overfits the data has high variance. A model with high bias failed to find all the pattern in the data so it does not fit the training set well, so it will not fit the test set well either. A model with high variance fits the training set very well, but it fails to generalize to the test set because it also learned the noise in the data as patterns.

The state value function $v_{\pi}(S_t)$ is defined the expected total amount of rewards received by the agent from that state $S_t$ until the end of the episode. In most cases, the agent cannot accurately predict the results of its action, so it is impossible for the agent to precisely calculate the state or action values. Thus, it needs to estimate them iteratively. This estimation is where bias and variance is introduced.

This formula is just an weighted average of $V_{\pi}(S_t)$ and $\text{Target}$, with the weight specified by the learning rate $\alpha$. In other words, on every update $V_{\pi}(S_t)$ takes a step towards the $\text{Target}$. The $\text{Target}$ used for the update defines the method. There are two basic methods for iteratively estimating the value function: Monte Carlo (MC) method and Temporal Difference (TD) method.

Bias and Variance in Reinforcement Learning

The idea of Bias-variance tradeoff appears when we compare Monte Carlo with TD learning. Remember that when we talk about bias and variance for these two methods, we are talking about the bias and variance of their target values.

The variance of an estimator denotes how “noisy” the estimator is. Because $G_t$ is a (discounted) sum of all rewards until the end of the episode, $G_t$ is affected by all actions taken from state $S_t$. For example, if there are two trajectories after taking an action $A_t$ and their returns are very different, individual returns $G_t$ would be far from the true value function $v_{\pi}(S_t)$. Therefore, variance of $G_t$ is high.

The relative bias and variance of Monte Carlo and TD can be summarized with the table below:

Underfitting and Overfitting in Reinforcement Learning

Another way to understand the table above is to use the idea of underfitting and overfitting. Matthew Lai from DeepMind explained this with the concept of eligibility traces: given a reward, find which actions led to this reward. Unfortunately, it is often impossible to precisely determine the cause of our death. Thus, we use a simple heuristic: we believe that actions close to the reward (in timestep) are more likely causes of reward.

Suppose that our agent in a “real life” environment died. To improve, we need to consider what actions led to our death so we can perform better. It is likely that its death was caused by actions close to its death: crossing the sidewalk in a red light or falling down a cliff. However, it is also possible that a disease it contacted several months ago is the cause of our death, and every action after had minimal impact to its death.

The Monte Carlo model uses the full trace: we look at all actions taken before the reward. Because we consider all actions, there will be a lot of noise. If we consider what actions the agent took in its entire lifetime, we will definitely find patterns, but most patterns will be coincidences, not actual patterns that can be generalized to future episodes. In other words, the Monte Carlo will overfit the episode. 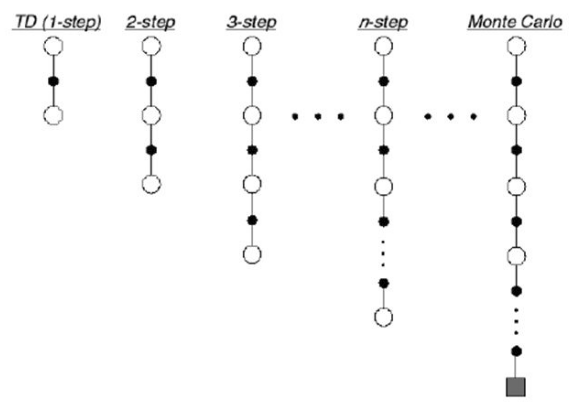 At the cost of an extra hyperparameter $n$, the $n$-step bootstrapping method works better than Monte Carlo or TD. 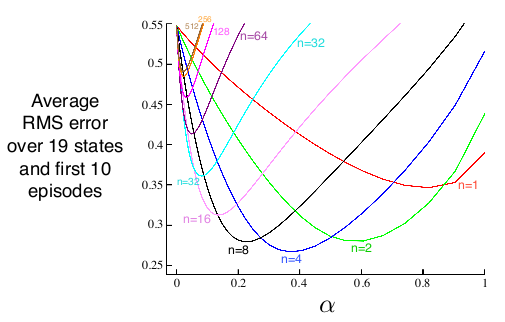 Bias and Variance is a significant problem in Reinforcement Learning, as they can slow down the agent’s learning. For simple environments, Monte Carlo method or Temporal Difference method work well enough, but for complex environments $n$-step bootstrapping can significant boost learning.