Experience replay is a technique that has been incorporated to many seminal deep reinforcement learning algorithms. These include Deep Deterministic Policy Gradient (DDPG), Hindsight Experience Replay (HER) and all Deep Q-Networks (DQN) methods. The popularity can be attributed to the fact that it is the only method that can generate uncorrelated data for online training. (One exception is using parallel workers, but this is more a circumvention than a direct solution.) 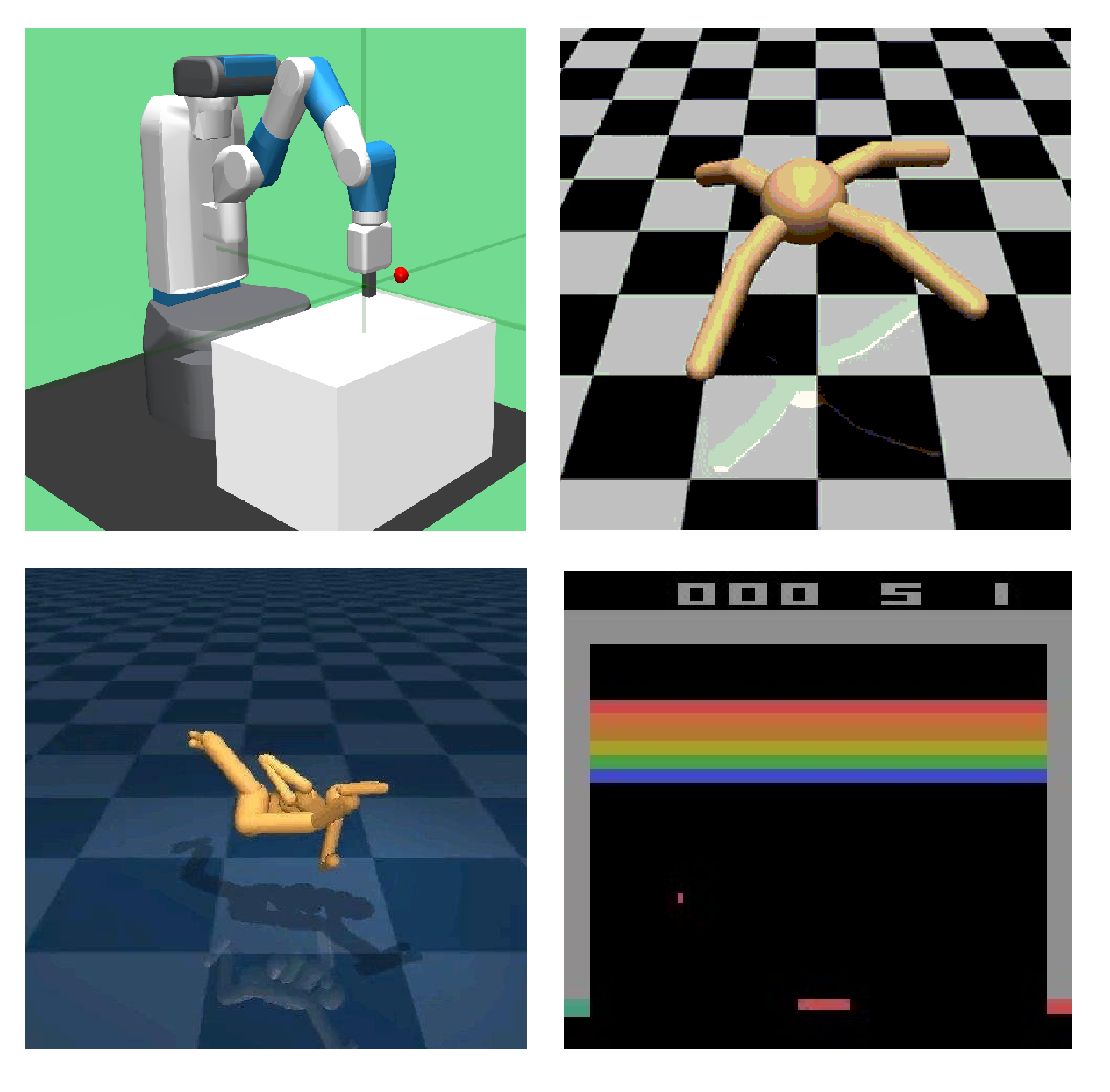 Thus, to mitigate this problem, we combine online learning and experience replay into Combined Experience Replay. At each timestep, the agent learns from a batch that consists of both the immediate transition $t$ and the sampled minibatch $B$.

In summary, we make two contributions in this paper:

Although it is possible to think of CER as a specific case of PER, they differ both in their use. PER was designed to further increase data efficiency, whereas CER was designed to remedy the negative effects of a large replay buffer. In other words, with a properly set replay buffer size, incorporating CER would not have a big impact on performance, but PER will.

We omit the discussion of complexity as we have not introduced CER yet.

Online-Q is the online Q-learning algorithm, where no experience replay is used. The agent learns from each transition once and discards it immediately after. 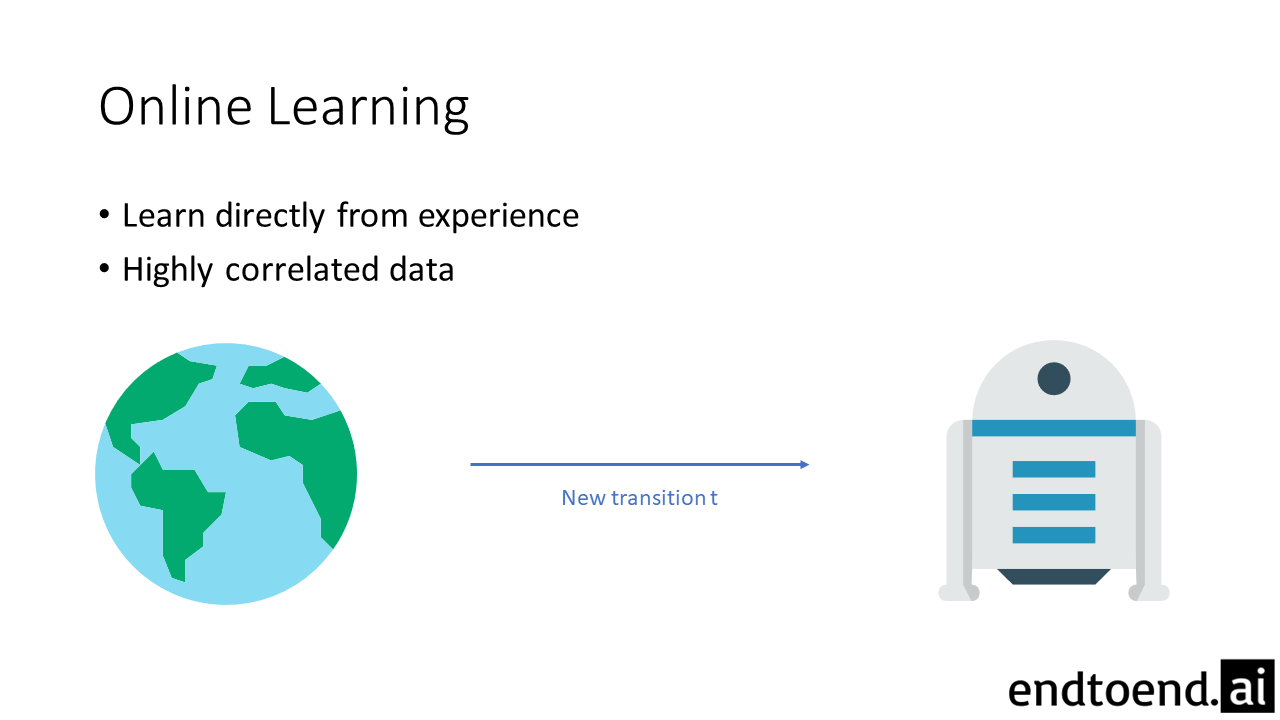 Buffer-Q is Q-learning with experience replay. Every transition is stored into the replay buffer $D$. The agent learns by sampling a batch $B$ from this buffer. This is equivalent to the Q-learning used in DQNs. 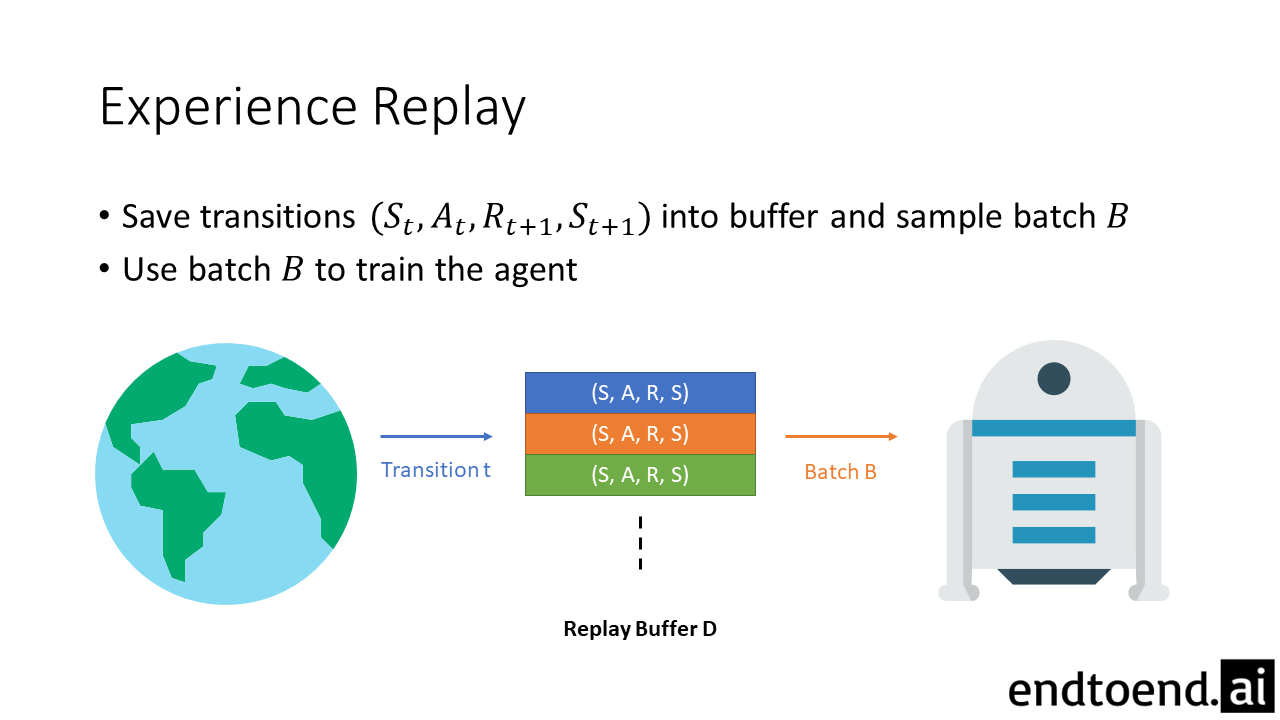 Combined-Q is the combination of online learning and learning with experience replay. All transitions are stored into the replay buffer $D$ and sampled for learning. However, the agent learns not only from the sampled batch $B$ but also from the just-experienced transition $t$. 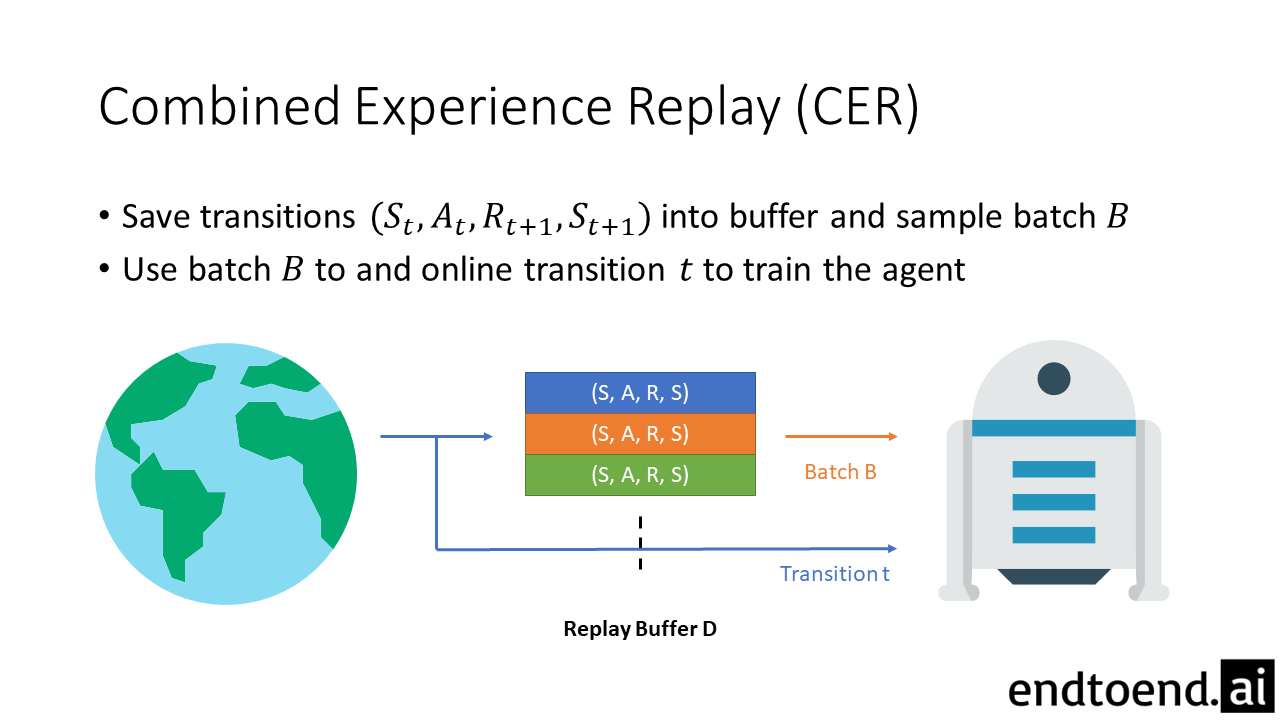 In Gridworld, the agent starts at a start state $S$ and seeks to reach the fixed goal state $G$. The agent has 4 actions (1 for each direction), and gets a reward of -1 at each timestep. The black squares define walls, which signify area that the agent cannot move to. If the agent attempts to move to the wall, it will remain in the same position.

LunarLander and Pong (RAM) are well-known environments for testing reinforcement learning algorithms. We direct unfamiliar readers to the official documentation.

To conduct experiments efficiently, we incorporate timeout in all three tasks. In other words, each task has a maximum episode length, and the episode will end automatically after reaching this length. This is necessary in practice since otherwise an episode can be arbitrarily long. Since this is still a modification of the task, we use a large enough timeout (5000, 1000, 10000 steps respectively) to reduce the influence in our results. To further reduce the effects of timeout, we use partial-episode-bootstrap (PEB) by Pardo et al. (2017).

Tabular Q-learning is guaranteed to converge as long as every state-action pair is visited infinitely many times (along with few other weak conditions). However, the data distribution does influence the speed of convergence.

Only the Gridworld environment is compatible with tabular methods.

In contrast, in Combined-Q, all transitions influence the agent immediately, so the agent is less sensitive to the replay buffer size.

(We omit the mathematical equation shown in the paper as it is too specific to argue for the general case.)

Only the LunarLander environment is compatible with tile coding, the linear function approximator we use.

In Lunar Lander, the state is represented as $\mathbb{R}^8$ via tile coding, and the agent has 4 actions. To encourage exploration, we use an optimistic initial value of 0 by initializing all weight parameters to 0. The discount factor $\gamma$ is 1, and the learning rate $\alpha$ is 0.125.

Again, we see that Combined-Q is more robust than Buffer-Q for non-optimal buffer sizes.

All three environments are compatible with nonlinear function approximators. With Gridworld, the states are encoded as a one-hot vector.

For Gridworld, the agent fails to learn with Online-Q or Buffer-Q and Combined-Q with buffer size $100$. It seems that the network seems to overfit to recent transitions if the replay buffer is too small.

Interestingly, many buffer-based agents have a performance drop in the middle of learning, regardless of the learning rate. We attribute this performance drop to the agents overfitting to the task.

For Pong, none of the algorithms learned a successful policy.

Although experience replay has shown great success, its flaws have been hidden due to the complexity of deep reinforcement learning algorithms. We identify one such flaw, and show that it can be controlled by tuning the replay buffer size. Prioritized experience replay (PER) is one technique that could address this issue, but it has a $O(\log N)$ even with a optimized data structure. We propose combined experience replay (CER) with $O(1)$ extra computation that remedies the negative effects of a large replay buffer.

However, as the varied degree of success show, we note that CER is only a workaround. The idea of experience replay itself is heavily flawed, and future efforts should focus on developing new data decorrelation methods to replace experience replay.