To handle real-world problems with massive scale, reinforcement learning must be accompanied with powerful function approximation methods. However, function approximation is a double-edged sword: its generalization effects can accelerate learning, but weight changes could also negatively affect learning in regions less frequently visited. Boyan and Moore (1995) showed that function approximators lead to poor convergence properties even in simple problems.

To prevent the agent from forgetting meaningful knowledge, we propose reusing previous knowledge. We store all previous experiences in the form of state-action transitions. Then, for every update, the entire batch of stored experience is reused to update the neural network. This can be seen as a special form of experience replay proposed by Lin (1992).

This algorithm differs by using a multilayered perceptron (MLP), and is therefore called Neural Fitted Q Iteration (NFQ). The paper focuses on the following three properties of NFQ:

We expect the readers to be familiar with Markov Decision Processes (MDPs). An MDP can be described by a set of states $S$, set of actions $A$, a stochastic transition function $p(s, a, s’)$, and a reward function $r: S \times A \to \mathbb{R}$. Unlike most current reinforcement learning papers that use the reward function $r$, this paper uses the cost function $c$. Thus, the objective of the agent is to find an optimal policy $\pi^* : S \to A$ that minimizes the expected cumulative cost for each state.

We also expect the readers to have basic knowledge of classical tabular Q-Learning algorithm. Again, note that we use the minimum of all actions since we use the cost function $c$.

where $s$ is the state before the transition, $a$ is the action applied, $s’$ is the state after the action, $\alpha$ is the learning rate, and $\gamma$ is the discount factor. Q-learning is guaranteed to converge to the optimal action value $q^*$ for finite $S$ and $A$ if every state-action pair $(s, a) \in S \times A$ is updated infinitely often.

Typically, Q-Learning updates are done online in a sample-by-sample manner.

Vanilla value iteration can only be used in finite number of states and actions. By using function approximation, we can ease the restriction on the number of states and allow $S$ to be continuous. To integrate neural networks into Q-learning, one small change must be made. Because Q-values are no longer stored in a tabular manner but instead encoded in the neural network, we need to compose an error function to update the weights of the neural network through backpropagation. One such error function would be the squared error of the current Q-value and the target Q-value.

We could naively use the same sample-by-sample online updates. However, such approach has shown to result in slow and data-inefficient learning. Weights adjusted from one state-action pair has unpredictable effects on other pairs throughout the state-action space. Although in many cases this allows for generalization and accelerates learning, it is also the main reason for unreliable and slow learning.

The sample set $D$ is collected by interacting with a real or simulated environment. Each experience in the sample set $D$ is a 3-tuple $(s, a, s’)$, where $s$ is the original state, $a$ is the chosen action, and $s’$ is the resulting state. It is also commonplace to include the reward / cost received to the tuple. However, we perceive the immediate cost as something specified by the designer instead of something observed by the environment. Thus, we leave out costs and specify it at a later point.

As we have mentioned previously, we do not save the cost in the transition samples $D$. This is because we view the cost as a product of design, not something given by the environment. Although NFQ is not bound to any particular type of cost function, we found it useful to standardize the cost function to setup the learning problem. Thus, we design the cost function by partitioning the set of all states $S$ into three sets:

We define the target differently for each set of states:

If the state ends in goal states $S+$ or forbidden states $S^-$, the episode is terminated. Thus, the target is simply the immediate cost $c(s, a, s’)$ or $C^-$. In other states, the costs from the remainder of the episode must also be considered, so $\gamma \min_b Q(s’, b)$ must be added.

For simplicity, we use a simplified version where the cost function is constant for all non-forbidden states. This makes the problem a minimum-time controller problem, where the task is to reach the goal states as soon as possible. This is often desirable in technical process control. We also set $C^-$ to $1$, since it is the maximum possible output of the neural network (due to the sigmoid activation function in the output layer).

We can modify the target slightly to make it valid for environments where the task is to stay in the goal region as long as possible, instead of simply reaching the goal. These problems are called regulator problems. In this case, the immediate cost is 0 at the goal states, so the target is just the estimated cumulative cost afterwards.

We discuss two possible variants of the basic NFQ algorithm. The first variant is about how the sample set $D$ is collected. In the basic algorithm, experiences collected in $D$ are “random rollouts”: the experiences are from interactions with environment through random play. However, this might result in an incomplete set of experiences to find the optimal policy. Thus, instead of random rollouts, we consider a variant where training samples are collected by greedily exploiting the current $Q_k$ function.

Another variant is to add an “artificial” training pattern called the hint-to-goal heuristic. This artificial data is useful since by definition their target value is 0, so training on these synthetic data “clamps” the value function to 0 at the goal region $S^+$. Since the goal region is defined as part of the problem, it is possible to synthetically generate training data in the goal region.

Among these, we select the number of cycles (steps) needed to achieve certain performance as the primary measure, complemented with number of episodes. The ‘number of cycles’ measure is useful since it is directly correlated to the number of interactions with the environment. In many real systems, interactions with the environment is the most likely bottleneck factor, so this measure can accurately evaluate the learning performance of the agent in real systems.

Now, let’s discuss how to evaluate the performance of the agent. It is commonplace to define an episodic “cost measure” and average them over some number of episodes. For minimum-time controller problems, we use the average time to goal as the cost measure. For regulator problems, we measure the total time outside the target region.

All experiments were performed using $CLS^2$.

In Pole Balancing, the agent’s task is to balance a pole at an upright position by applying left, right, or zero force every 0.1 second. The states are represented by the pole angle $\theta$ and the angular velocity $\theta’$. The states are partitioned as follows:

Three actions are available to the agent:

(For more details about the environment, please read Section 9.2 of Least-Squares Policy Iteration by Lagoudakis and Parr (2003))

The sample set $D$ was generated by starting the pole in an upright position and then applying random actions until failure.

To approximate the Q-value, we use a multilayer-perceptron with two hidden layers. The input layer has 3 nodes: 2 for the state $\theta, \theta’$ and 1 for the action. The hidden layers have 5 nodes each, and the output layer has 1 node. A sigmoid activation was used in all output. We used the discount factor of $\gamma = 0.95$. 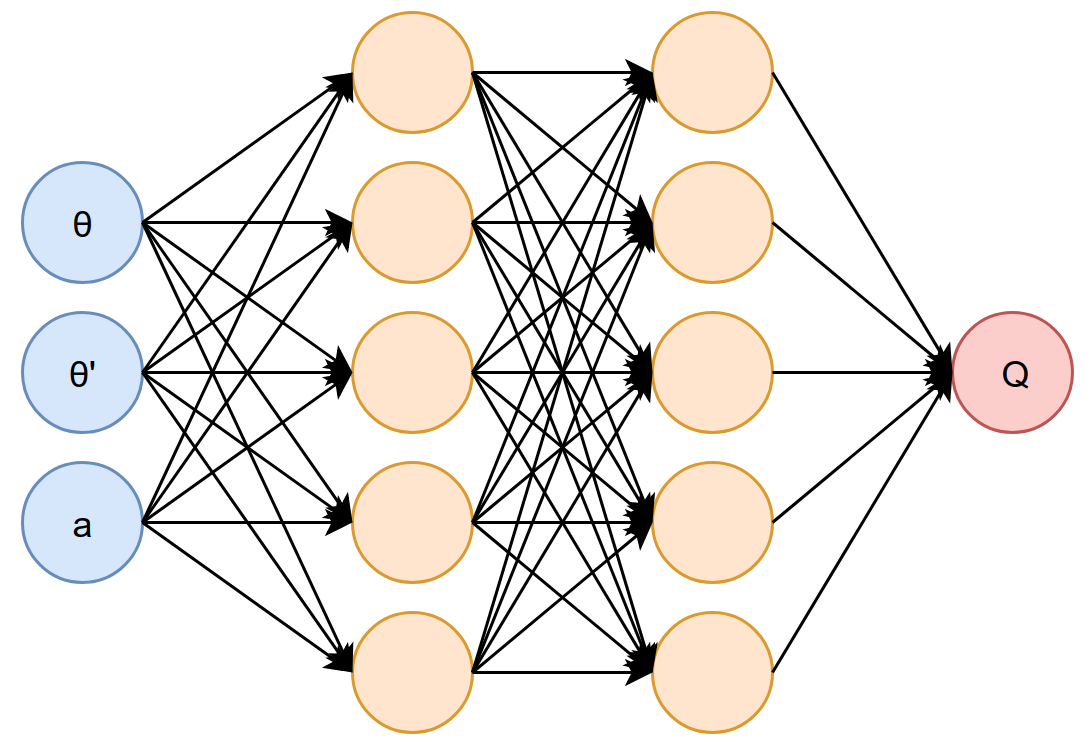 In Mountain Car, the agent’s task is to accelerate the car up to the top of the hill. Unfortunately, the agent’s car is too weak to drive directly up the hill, so the agent must learn to move in the opposite direction to gain momentum. In this task, a state is represented by the position $x$ and the velocity $x’$.

To generate the sample set $D$, initial starting states were drawn randomly such that $x \in (-1, 0.7)$ and $x’ = 0$. Instad of using random actions, the actions for the training episode were generated by the controller, greedily exploiting the current Q-value function. Each training episode had a maximum length of 50 steps. We also use the hint-to-goal heuristic, where we generate artificial data in the goal region. After every training episode, we generate 100 such artificial transitions.

We used the same neural network architecture as the Pole Balancing problem. The weights were randomly initialized within the interval $[-0.5, 0.5]$. 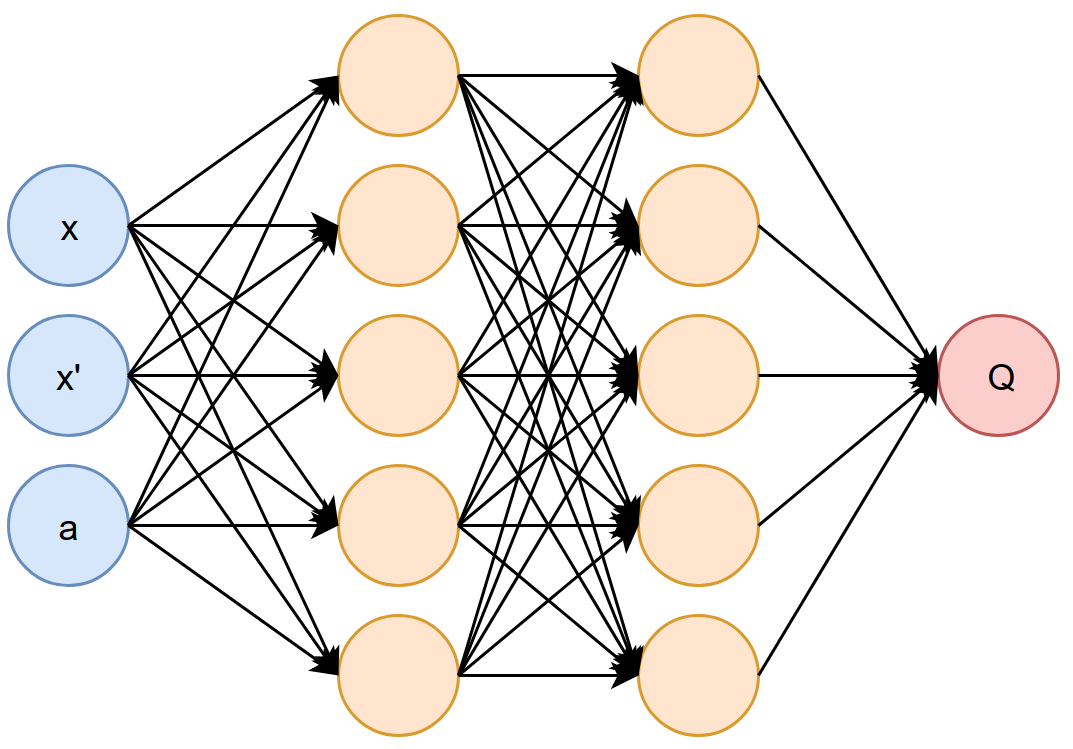 To test our NFQ algorithm, we run 20 experiments, with each experiment having different initial starting states for generating the sample set $D$ and different initial weights for the multilayer perceptron. For each experiment, we train an agent for 500 episodes. In all 20 experiments, the agent was able to find a successful policy - a policy that can reach the goal state from all of the 1000 starting states. On average, it took 139 seconds for the controller to find a successful policy.

To generate the sample set $D$, the initial states are drawn randomly such that $x \in [-1, 1]$, $\theta \in [-0.3, 0.3]$, and $x’ = \theta’ = 0$. The actions are selected greedily using the current Q-value function until a forbidden state is reached or the maximum episode length of 100 is reached. We also use the hint-to-goal heuristic, generating 100 artificial goal-region transition after each training episode.

We use the same neural network architecture as the Pole Balancing problem and the Mountain Car problem, except the input layer has 5 nodes instead of 3 since the state is represented by 4 numbers $s = (x, x’, \theta, \theta’)$. The sigmoid activation function is used in all layers. 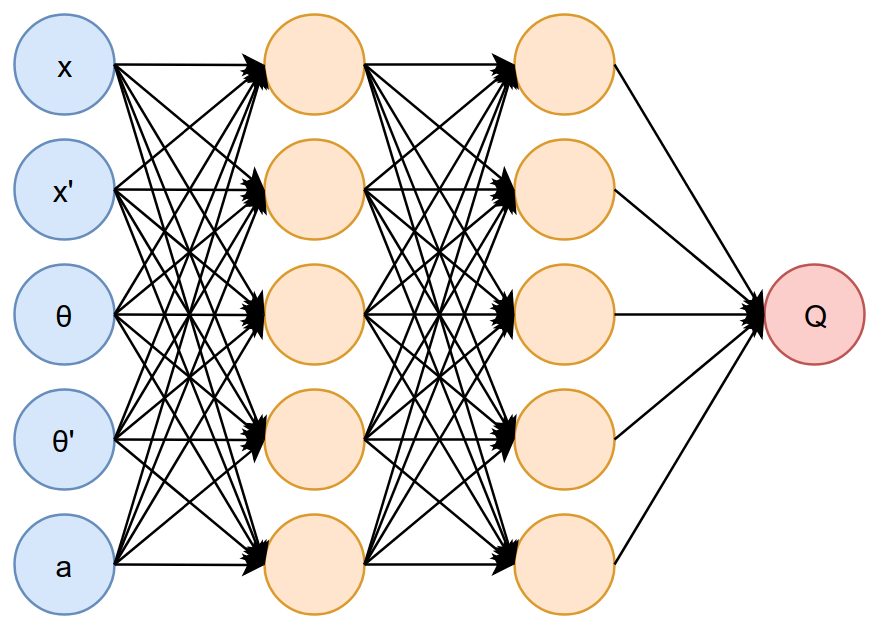 The trained controller is tested on 1000 testing episodes, each with a maximum length of 3000 cycles. A controller is successful if at the end of the episode, the controller is in the goal region $S^+$.

Let’s first look at the learning performance (the speed of learning). The experiments show that on average less than 5 minutes of interaction is needed to find a successful policy, while finding the optimal policy takes less than 10 minutes on average. To evaluate the control performance (the quality of the policy), we compare NFQ with a linear controller using a pole assignment method (classical control method). We see that the controller trained with NFQ has about $1/3$ the average cost of that of linear controller, showing that the NFQ controller reaches and stays in the goal region much better.

This paper proposes NFQ, a memory based method to train Q-value functions represented by a neural network. We show that storing and reusing experiences allow for greater data efficiency and more reliable learning and convergence. NFQ was able to learn successfully on 3 optimal control problems using an identical neural network structure, showing that NFQ is at least somewhat robust against hyperparameters.