RL Weekly 29: The Behaviors and Superstitions of RL, and How Deep RL Compares with the Best Humans in Atari 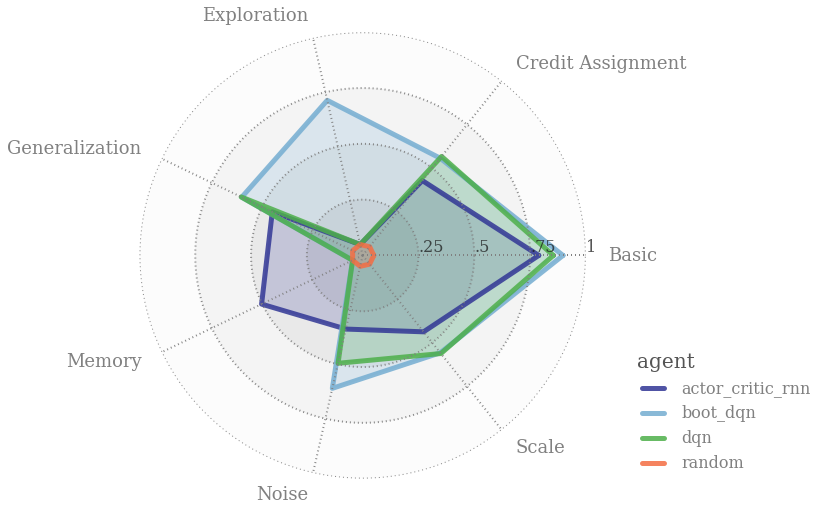 A “good” RL agent might not be the agent that simply has the best score on a certain environment. An efficient RL algorithm must handle the various challenges the RL framework gives:

It is difficult to assess these features of an agent in a separated setting. For this reason, the authors created bsuite, a collection of diagnostic experiments to analyze the capabilities of RL agents and provide insight.

The authors emphasize that bsuite will be continuously developed, with new experiments added from the research community.

“Superstition” in the Network 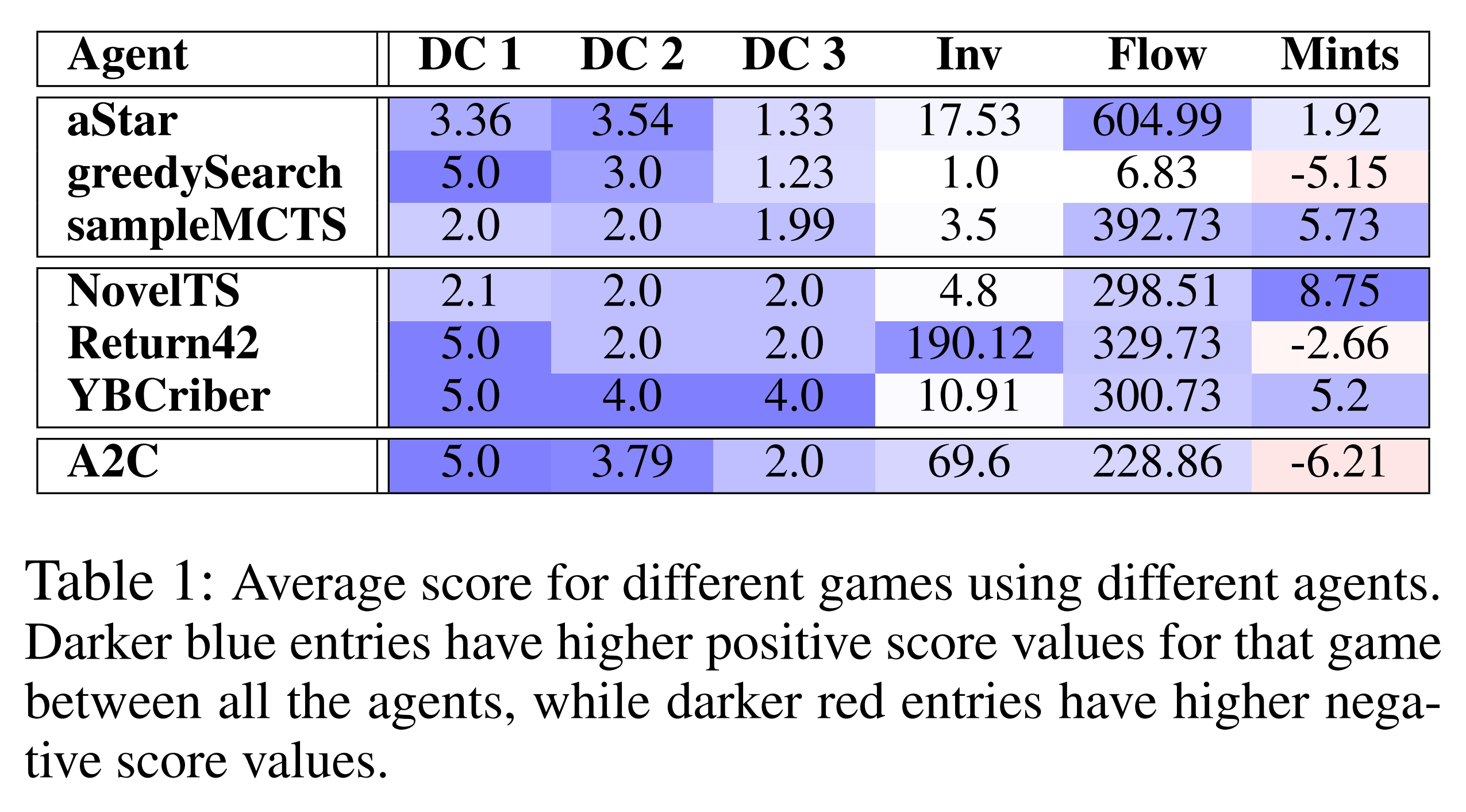 Deep RL agents have been successful in a lot of games, yet it still fails on many games. To characterize the environments that “trick” the agent well, the authors present four “deceptive” games, each with a different type of deception.

The first is DeceptiCoins (Top left). The agent can choose between two paths: left and right. The left path has an earlier but smaller reward, and the right path has delayed but greater reward. This is the classical exploration vs. exploitation problem.

The third is Flower (Bottom left), the “Delayed Reward” problem. The agent supervises a field with flower seeds that grow into flowers, and the agent is given higher reward for flowers than seeds. The optimal agent should wait until the flower is fully grown, then harvest it quickly.

The fourth is Invest (Bottom right), the “Delayed Gratification” problem. The agent can invest their reward, incurring a penalty, to receive greater reward after some time.

As shown in the table above, the A2C agent fails to learn optimal behavior in many environments.

(The authors examine in great detail how an A2C agent and various planning agents act throughout training. Try formulating a hypothesis about each learning curve, and read their explanation to see if you are correct!) 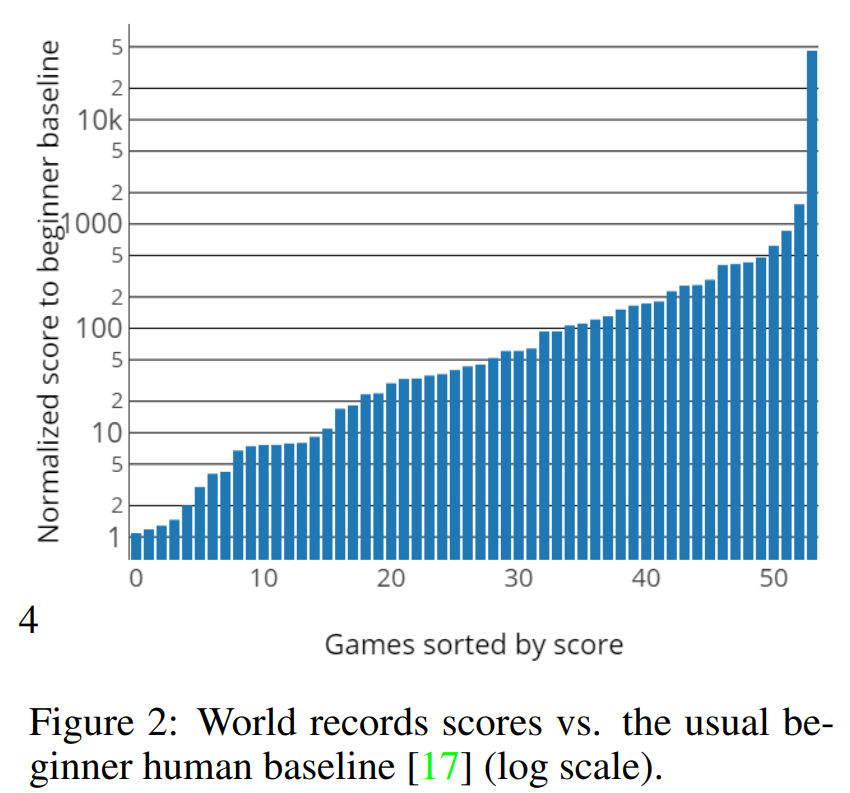 Since Deep Q-Networks (DQN) and its various improvements (namely Rainbow and IQN), the Atari environments provided via the Arcade Learning Environment (ALE) has been labeled as “solved,” with the agents performing in “superhuman” levels in most. The authors propose a benchmark SABER (Standardized Atari BEnchmark for RL) following the advice of Machado et al. about evaluations in ALE (2017). The recommendations are (1) adding stochasticity through “sticky actions,” (2) ignoring the loss of life signal, (3) using the full action space of 18, and (4) averaging performances over 100 episodes.

The authors also argue that following other RL works such as AlphaGo, AlphaStar, and OpenAI Five, the Atari agents should be compared against the world’s best humans. Thus, the authors compile a human world records baseline. With Rainbow and their own Rainbow-IQN, they show that RL agents only outperform the best human scores in only 3 or 4 games.

One-line introductions to more exciting news in RL this week: 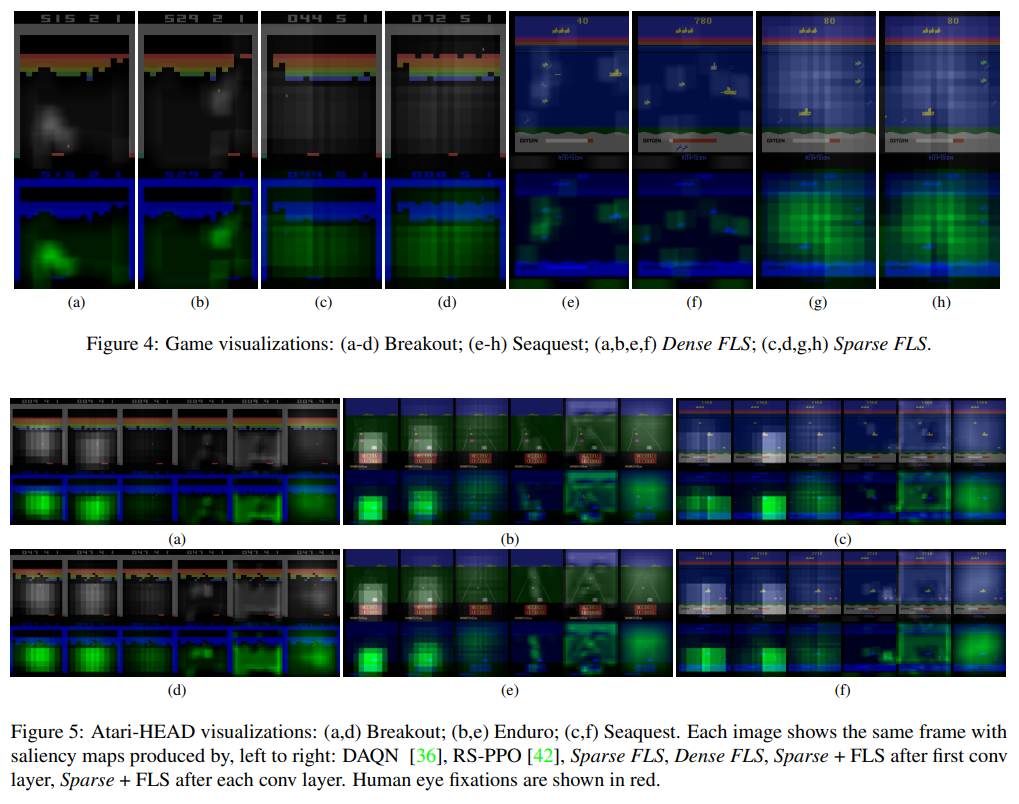 RL Weekly 30: Learning State and Action Embeddings, a New Framework for RL in Games, and an Interactive Variant of Question Answering