Emergent Tool Use from Multi-Agent Autocurricula

In this simple environment, complex behavior emerge as the episode progresses. At first, the hiders simply hide from the seekers without using the objects. Then, they start using obstacles and objects during the preparation phase to create a “shelter.” When the seekers learn to breach this shelter using the ramp object, the hiders then learn to bring the ramp into the shelter or lock the ramps far away from the shelter so that the seekers cannot use them. The seekers then learn to “box surf,” moving on top of the box object, to breach the shelter, where the hiders react by locking all objects during the preparation phase.

Agents are trained using self-play, and the agent policies are trained with Proximal Policy Optimization (PPO). “All agents share the same policy parameters but act and observe independently.” The training is distributed using the rapid framework, and needs 132.3 million episodes (31.7 billion frames) over 34 hours of training to reach the “final stage” of observed agent behaviors.

Through the Attraction-Repulsion (AR) auxiliary loss shown above, the population of agents are encouraged to attract or repel one another. The AR loss measures the KL-divergence of two policies. If the coefficient in front of the KL divergence is positive, the agents “repel”, and if it is negative, the agents “attract” one another. To calculate the AR loss of a policy, the algorithm keeps a fixed-size policy archive (Section 3.1).

The training of Attraction-Repulsion Actor-Critic (ARAC) is a repetition of sample collection, critic updates, actor updates, and actor evaluation. To update the critic network, ARAC identifies top-K best agent (“elites”) and only uses these policies. Also, when updating the actor networks, only the top-K agents use the AR loss (Appendix 6.1).

In MuJoCo benchmarks, ARAC is shown to outperform CEM-TD3, CERL, ERL, SAC-NF, SAC, and TD3 in most tasks.

As a sidenote, the paper mentions the Machine Learning Reproducibility Checklist in its appendix and points out how the paper satisfies each point.

Making Efficient Use of Demonstrations to Solve Hard Exploration Problems 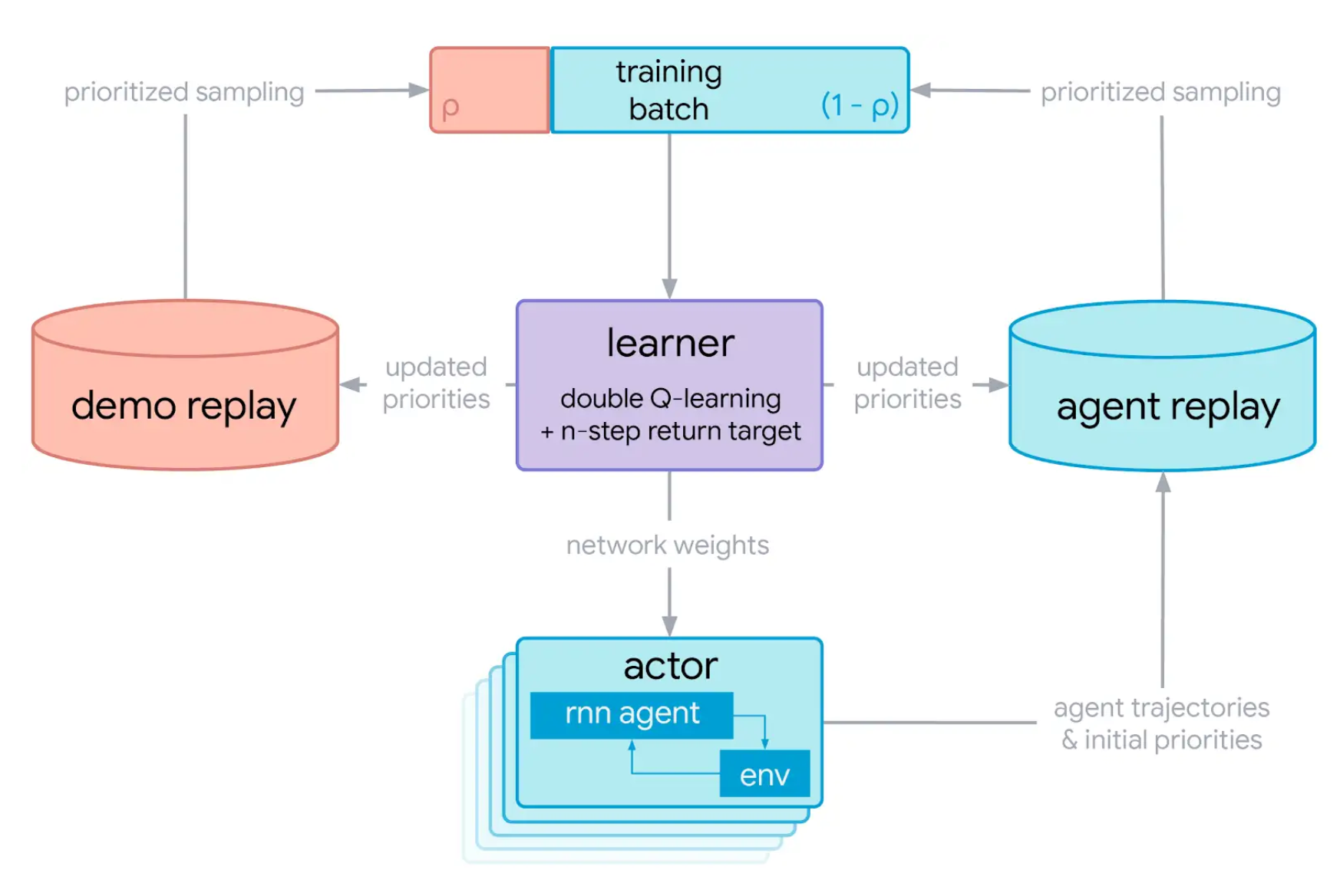 Learning from demonstrations is very effective in many hard exploration environments (such as Montezuma’s Revenge) and helps reducing sample efficiency. However, it is challenging to use demonstrations if there is a wide variety of possible initial conditions, since the learner must generalize between these different environment configurations.

R2D3 is tested on the “Hard-Eight test suite” (Appendix B.1) with three baseline algorithm: Behavior Cloning, R2D2, and DQfD. R2D3 is the only algorithm that solves any of the tasks, showing that aspects from both R2D2 and DQfD are needed to succeed in these environments. The authors also find that the algorithm in sensitive to the “demo-ratio” hyperparameter and that the lower demo-ratios consistently outperform higher demo-ratios (Section 6.2, Figure 6).

Here are some more exciting news in RL since the last issue:

Thank you for reading RL Weekly. Please feel free to leave any feedback!

RL Weekly 30: Learning State and Action Embeddings, a New Framework for RL in Games, and an Interactive Variant of Question Answering

RL Weekly 32: New SotA Sample Efficiency on Atari and an Analysis of the Benefits of Hierarchical RL